Cassandra describes her position as the village wise woman of St Buryan. She advertises her services on the internet, but does not neglect the age old traditions of the Craft. For more information on Cassandra Latham visit her website at www.

Museum of Witchcraft and Magic

Skip to main content. Common as it has been over the past several centuries, the practice is secretive and there are few written records. It tends to be passed down through families and never revealed to outsiders. But archaeologist Jacqui Wood has unearthed evidence of more than 40 witchy rituals beneath her own front yard, bringing to light an unknown branch of witchcraft possibly still practiced today.

Wood's home is in the hamlet of Saveock Water in Cornwall, a county tucked in the far southwest corner of the country. For thousands of years people have raised crops and livestock in its fertile valleys, and its coastline of dramatic cliffs, secluded coves, and pounding surf was once a haunt for smugglers. Cornwall is a place time forgot; steeped in folklore, myth, and legend; and purported to be inhabited by pixies, fairies, and elves.

So it should come as no surprise that it has also been home to the dark arts. When I visit Saveock Water it is raining, which adds to its unearthly atmosphere. Wood, a warm lady with sparkling hazel eyes, greets me in her cozy white-washed barn while rain hammers on the roof. She moved to Saveock Water 15 years ago because it was an ideal location for her work in experimental archaeology, replicating ancient techniques, including those used in farming or metallurgy. Since then she has carried out her experiments, such as growing ancient crop varieties, unaware of what lay under her fields.

In the late s, Wood decided to do some metalwork research by re-creating an ancient kind of furnace. Wood was excited but busy with other projects and left the find undisturbed for a few years. In , she gathered some archaeology students to explore it further. While digging a hole for another project, Wood discovered a late Mesolithic clay platform in her field. She found that small pits had been dug into the platform at a later date, and contained bizarre collections of items including swan skins, pebbles, and bird claws.

As the group peeled off layers of turf, they discovered the clay floor was an extensive man-made platform--probably a foundation for a group of ancient dwellings. During a break in the rain, Wood takes me out to have a look. What used to be a half-acre marshy field is now a slippery clay surface, covered with small plastic crates protecting finds. Based on flint fragments embedded in the clay, a Danish specialist dated the site to the late Mesolithic, around 8, years ago.

But as Wood and her team excavated the platform over the next few seasons, unusual features began to emerge. They came across strange rectangular holes, about 15 by 10 inches, in the clay. But the first of the holes, about 6 inches deep, was lined with white feathers. The pits cut through the clay platform, so Wood knew that they had to date to a later time, but only an expensive radiocarbon test could pin it down. But that couldn't be the case--Wood found that the feathers were still attached to the skin, which had been laid in the pit with the feathers facing inward.

A bird expert from the local zoo confirmed they came from a swan. On top of the swan skin, Wood found a pile of pebbles and a number of claws from different birds. She later learned that the stones came from a coastal region 15 miles away, though no one knows why they were brought from so far. Someone had gone to considerable trouble to gather the contents of this pit.

That season, Wood and her colleagues found eight pits, two of which contained odd collections of bird parts, and six of which had been emptied, but with a few telltale feathers and stones left behind. History, folklore, superstition and magic fascinated me, and I was fortunate that some of the schools I attended held interesting books relating to these subjects, and even directly to witchcraft, in their libraries. I was fourteen or fifteen when I consciously decided to begin serious study of witchcraft practice.

And so I worked instinctively; merging those things I took to from the modern Craft literature, my own ideas, and, importantly, what I could glean from Cornish witch-lore. I also discovered much that was strikingly in line with my own instinctive practices, which served as a wonderful confirmation that I had been doing it right! Firstly one has to have the natural inclination. I feel one also has to develop and nurture the ability to seek instruction, wisdom and inspiration from the lonely wild places and the countryside.

Then there is the studying of textual information, but the prior approach is the more important and without it, one cannot be a witch. One may dedicate oneself as a witch, or receive initiation into the Craft via apprenticeship to another practitioner, or via admission to a witch covine. In Cornish folklore, there are interesting traditions that one can become a witch by rescuing a stranded mermaid and bargaining with her for power in return, or by attending holy communion, and hiding away the wafer, to feed later at midnight to the Devil who will appear in the form of a giant toad, or by climbing onto a logan stone rocking stone nine times without causing it to move.

Today there is a bewildering array of books available exploring the ways of witchcraft, although those that are worth reading are very few. I always recommend the books of witch and author Doreen Valiente to those seeking their first information on witchcraft; for her work straddles both traditional witchcraft and the Craft of the Wica. This extraordinary museum contains a huge collection of witchcraft related artefacts and regalia; many relating directly to the traditional magic of Cornwall and the West Country.

Here I can only speak of my own approach to this, as every practitioner will have their own ways and methods.


To date, all clients I have heard back from have reported that the guidance they have received has been very helpful, and some have had further question to ask. Gosh, there are many types of ritual; from simple daily devotions, to magical rites for all manner of needs, up to celebratory and devotional covine rites.

For magical rites, the moon is very important. In its waxing tide to full, it is a good time to work for increase, empowerment, the encouragement or conjuration of things desired, and other generative workings.

Potency, virtue and wisdom may be found in the land, as mentioned previously, and so the witch walks the land in pilgrimage to imbibe of these things, to be drawn upon and utilised later when needed. What holidays do witches celebrate? Whilst witchcraft is not a religion, nor do witches necessarily have to align themselves with any particular religion or spiritual philosophy, in Britain, and elsewhere in Europe, witches and folk-magical practitioners have traditionally operated within a curious, but not entirely contradictory, observance of Christianity and Paganism.

The Divine is the Divine, and no living human, or their religions, can fully comprehend its true nature. Witch rites of worship are rites of Love, Beauty and Truth, and it is through The Bucca that we seek experiential phenomena and glimpses of the Divine Truth; for all goddesses and gods are fragments of that Truth.

One tries to cultivate a permanent spiritual awareness, and within domestic life there are a variety of ways in which I interact with spirit. Household charms need to be maintained through their regular acknowledgement, and household spirits kept happy through the provision of sustenance and comfort via hearthside rites of offering. That is a lovely question, and a happy one for me to think upon. Whilst, like all things, it has its costs, there are many wonderful benefits. TWTP: When was it that you first became aware of Witchcraft and what were your initial thoughts about those who practiced it?

GG: Like many people, witches and witchcraft permeated my consciousness in childhood via fairytales, particularly those collected by the Brothers Grimm from Germanic folklore. 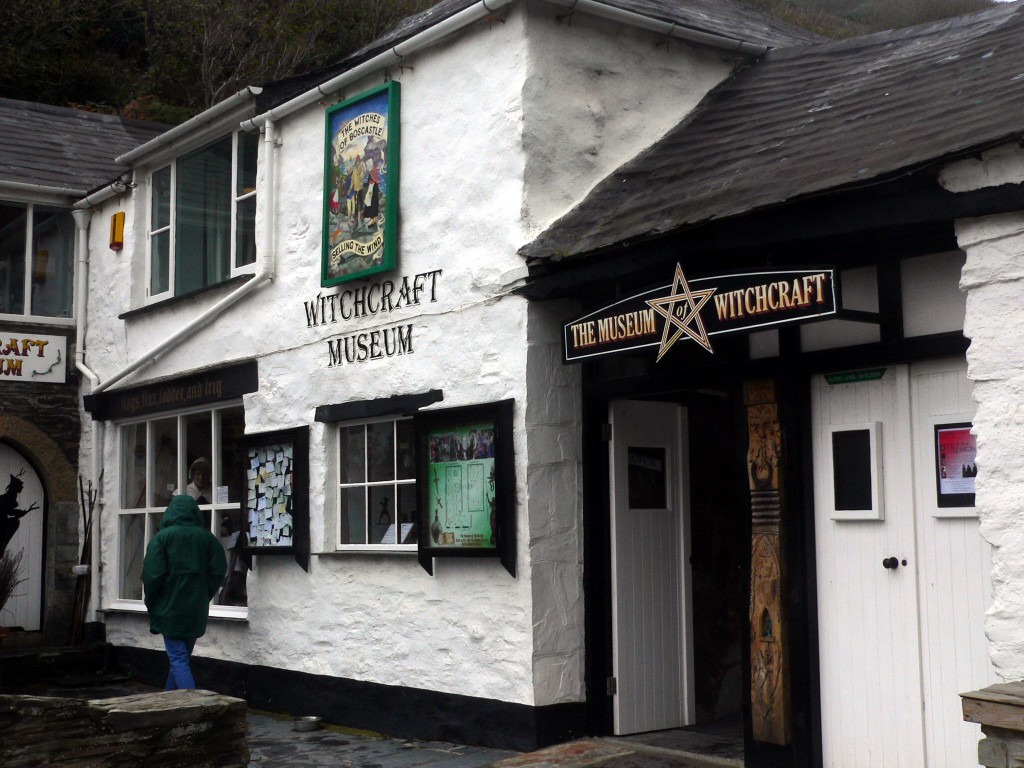 As I lay in bed as a child, looking through my fairytale books, it was the wonderful illustrations that caught my imagination, more so than the stories; these strange and mysterious people, who seemed to have a foot in both the human world and the otherworldly, and who lived reclusively with animals, spirits and wonderful magical items, being at home in the darkling wood with its nocturnal creatures and hidden presences.

TWTP: Do you remember when and the specific circumstances surrounding your own decision to embrace Witchcraft as part of your life?

WITCHCRAFT in CORNWALL I Museum of WITCHCRAFT BOSCASTLE

GG: Really, no. I remember as a child one summer, being in a ploughed field with my father who was looking for any ancient bits and bobs that might have been brought to the surface. So, off I plodded, up to the tree and gave it a kiss and made my wish — to be a witch. In the end, I chose not to attend school very much, other than being happy to take part in art class, I would often just take myself home, or would spend time in the school library reading through books on antiquities, folklore, superstitions, customs, country ways and witchcraft. I was already pursuing a path of witchcraft long before I left school.

In either case, these creatures did indeed have life, existed, and were seen and experienced by others. I was immediately intruiged by the glimpses of these mysterious people, doing strange things in remote Cornish places; they seemed to be defiantly re-enchanting an increasingly mundane world. TWTP: What were some of the biggest misconceptions that you held that were dispelled once you understood what Witchcraft was all about as a practitioner and not as an outside observer? GG: Scale and diversity. I had believed that witches were an extremely rare breed, existing very few and far between, and that they were wonderfully strange, reclusive and otherworldly beings living entirely strange and otherworldly lives.